Eldest of the Fates

To look at a painting by Simon Casson is to travel at one glance across three hundred years of art history. Casson paints Old Masters. But he is no mere pasticheur. His purpose is not to imitate in any retrograde way - but to use the images of the past to harness new and original ideas with which we can all identify and which, ultimately he hopes, will open our minds to the simple truths of our existence.

It is, perhaps, despite the precise titles of his pictures, never entirely clear quite what Casson is painting. The majority of his works deal ostensibly with the female figure - classical in genre and dress, each of them exuding a perceptible feeling of anticipation. But what exactly are they waiting for? Love? Sex? Redemption? Retribution? All are possibilities. None are important. An equal blind alley is the sense in which Casson's art is to do with the way in which men objectify women. But lest you begin to imagine a militant feminist subtext to these paintings, it is important to realise from the start that what we have here is really a lesson in the way we all address all aspects of visual imagery. Certainly these are seductive pictures, often they are sensual - even 'sexy'. What they are not is voyeuristic, in any exploitative sense. Rather, they play on our senses, inviting us in with a suggestion of Dionysian excess, prior to hitting us with a subtext which reveals their true beauty, conveyed through a quite different medium than that of mere voyeuristic gratification. Casson achieves this by infiltrating his Old Masters with a series of bold brush marks - searing blocks of colour.

It may perhaps seem extraordinary that, despite the fact that Casson deliberately obliterates what we might on first acquaintance, have perceived to be the essential detail of his figurative subject matter, his canvases can still be termed 'heroic'. They have a wonderful monumentality, Casson's painterly intervention in additional relevance to the post-modern world. In painting his areas of pure abstraction, Casson questions the reason behind the making of the original Old Master paintings. In their initial incarnation, these works satisfied a need to feed off mythology at a time when heroic deeds served as both role model and a source of vicarious excitement. He invites us instead to look at the brush stroke itself and consider its own, incontrovertibly heroic nature.

Of course, Casson is not alone in using Old Master paintings as the basis for his own art. Such contemporary artists as Glen Brown, Julie Roberts and Alison Watt have recently made similar raids on the visual wealth of the past. Unlike Brown though, Casson is not out to make a cheap joke at the expense of
art history. Rather, it is Roberts, interfering as she does with familiar imagery, drawn specifically from the age of the Baroque, who most clearly echoes Casson's penchant for deliberately unsettling the viewer. Watt, in her turn, recalls his tendency to de-personalise, robbing her borrowings from Ingres of their sense of identity simply by removing their heads. Unlike any of these artists, though, Casson is not specific in his imagery, gleaning his prototypes - often hybrids concocted from a number of lesser-known masterpieces -from the pages of saleroom catalogues. He also uses paint in a way much more akin to its handling by the original masters. Yet, given this degree of painterly verisimilitude, at the same time each of the paintings functions on its own terms, principally as an essay in sublime abstraction.

For an artist who might be termed 'abstract' to focus on ancient mythology and classical thought is, of course, nothing new. The Gods have long left the preserve of the Old Masters. Think for instance of Pollock's great canvas Pasiphae, painted in 1943, of Rothko's preoccupation with Greek myths as symbolic parallels for mankind's fears and obsessions and of Barnet Newman's late 1940s series of pictures on the theme of Euclid. In the realm of the figurative too look at the Surrealists' use of such subject matter, from Venus and Oedipus to the Minotaur, as vehicles for their own investigations of the human psyche. Casson's method might even define him as a quasi-Pop or Post-Pop artist - appropriating specific images and applying them to his own process. The difference here though which distances him from Warhol or, in more contemporary terms, Sigmar Polke, is that the images from which Casson borrows are not within the everyday language of popular culture - gleaned from the press or some kitsch wallpaper pattern - but part of the esoteric visual vocabulary of high art. But, it does not follow that, if Pop monumentalize everything it touches, Casson's work has the reverse effect. For it does not denigrate the idea of high art but subtly transforms it.

Just as the artists of the Renaissance and the Baroque resurrected the ancient Gods, buried during the dark ages, for their own didactic purposes, so Casson has in turn resuscitated their method of painting -painstakingly naturalistic and at the same time lush with bravura brushstrokes. And as the Humanists managed to integrate the same Gods with their own God of Christianity, so he marries the obscure Old Master painters of his choice to the new painterly faith of the modern age - the language of abstraction with its concomitant theosophical baggage. Casson plays upon similarities between Baroque art and 20th century abstraction. just as the one involved a search for the sensational as a means of approaching a closer communion with the almighty, so the other has traditionally pursued that same goal by transcendental means - allowing the viewer to peer through the frame of the picture plane into a world beyond.

What this means, in essence is that, while the myth of Leda and the Swan for instance, might have been held to parallel the descent of the Holy Ghost to the Virgin during the annunciation, both can be seen as metaphors for the abstract notion of a meeting between the natural world which we all inhabit and some intractable, divinely-informed spirit. What Casson suggests to us is that a similar dialogue - with the same ultimate message - also exists between the overtly symbolic and complex iconography of the Old Master mythology painting and the primitive mark-making of such as Pollock or Rothko.

These paintings work on several different levels. In Aphrodite on Mount Olympus, for example, Casson produces both a hymn to beauty and an art which is entirely original - a refreshing revisionist look at the language of painting and the way in which we expect a painting to affect us. The body of Aphrodite, the Goddess of love, as revealed by a shapely, beckoning leg, becomes simply a series of contours - part human, and in part taking their form from the land itself. Thus, literally, the Goddess becomes the mountain. Her beauty only needs to be present in our mind. It is necessarily ideal. And yet, in another dimension, this painting is also a large abstract - drawing us into its uncertain, ambient depths with all the power of a de Kooning. And as we gaze deeper into this ambiguous, molten space, what once appeared to be so certain an image, seems almost to be deconstructing itself before our eyes.

Look also at Casson's Demeter at the Feast of Tantalus. On one level, of course, it is quite possible to understand this painting purely in terms of its aesthetic impact. To look at it as an abstract composition and then to integrate into this the straining nude torso, the fragmented still lives, the luxuriant drapery. But, merely understand a little of the myth from which it draws its title and this extraordinary image takes on a deeper level of meaning. Tantalus, having been entertained on Olympus, divulged the secrets of the Gods to man. As punishment he was placed, for eternity, in one of the underground rivers of Hades with, hanging over his head, a temptingly laden fruit tree. Every time he tried to drink from the waters they would dry up and every time that he tried to reach for the fruit he found it to be just beyond his grasp. Now look again at Casson's painting. Here, in uncompromising imagery of now terrible beauty, it is a parable of despair. A revelation of how so much in life can be unfulfilled. How hopes can be raised only to be dashed in an instant.

Similarly, The Eldest of the Fates, demonstrates the admirable aptness of the Greek practice of seeking explanation for the inexplicable in the invention of the deities. There were three fates: Clotho, Lachesis and the eldest Atropos, who was responsible for severing the thread of life. In her was vested the ultimate power of life and death. For Casson, she is a reclining Boucher nude, her face typically obscured, presented within a blue-draped boudoir which blends seamlessly into a passage of pure blue paint reminiscent of Sam Francis at his boldest. It is a good illustration of the essence of Casson's art - how some physical action - in this case death - can be symbolized by means of colour and form - the sheer lugubriousness of Atropos' naked body emphasizing the cruel, apparent randomness of death.

This sense of being subject to ruthless, unavoidable destiny, of our being governed by what the ancients termed 'the Gods', permeates all Casson's work. Take his image of Tartarus, the deepest level in hell in Classical mythology, located some distance below Hades. Here is a place of unimaginable suffering and punishment, whose queen, herself the apparent subject of the picture, must clearly be the most uncompromisingly unpleasant being in the universe. Here though, she is represented by nothing more than a still life of fruit on a carpet, infiltrated with flat areas of grey paint. This might at first seem strange, particularly when seen among such other, apparently literal representations of `the Gods'. Yet think about it and the implication becomes clear. It is the painting itself which has become, in a sense, 'the Queen of Tartarus'. An uncompromising pseudo-anthropomorphic icon of western artistic tradition, it holds our gaze - and returns it, keeping the viewer forever in range, encroaching upon our sensibilities, imprisoning us in a living hell which denies escape from the mental prison of art-historical frames of reference. It is a warning of the evils of compartmentalisation from which Casson so clearly wants to escape and from which he also wants to liberate his viewers. If we only try to open our eyes and minds, he suggests; if we only take the trouble to look, we can learn the real lessons of art. )* can understand that all painting, as we see it today, before us on the canvas, is in a way 'contemporary'. That art is not about specific periods and styles, fashion or facture. That it is not even (as one museum director famously has it) about power, money, social-climbing and sex. Art rather, in the hands of Simon Casson, is a unique means of understanding a little more about the essential mystery, truth and irony of the human condition. 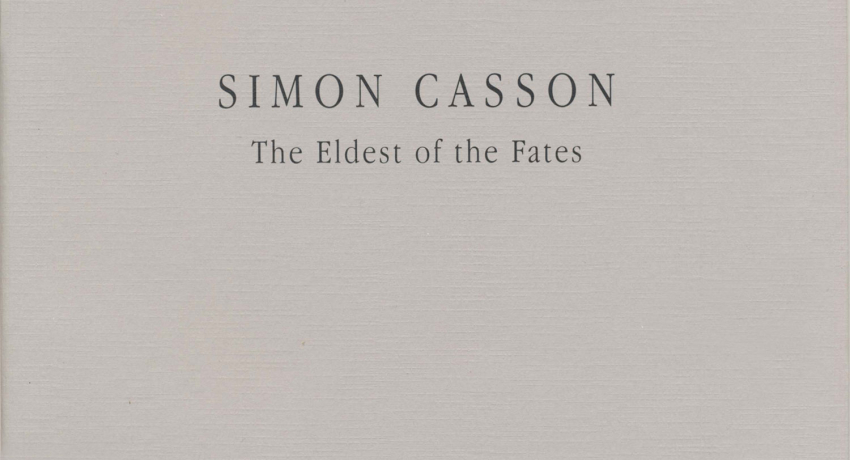 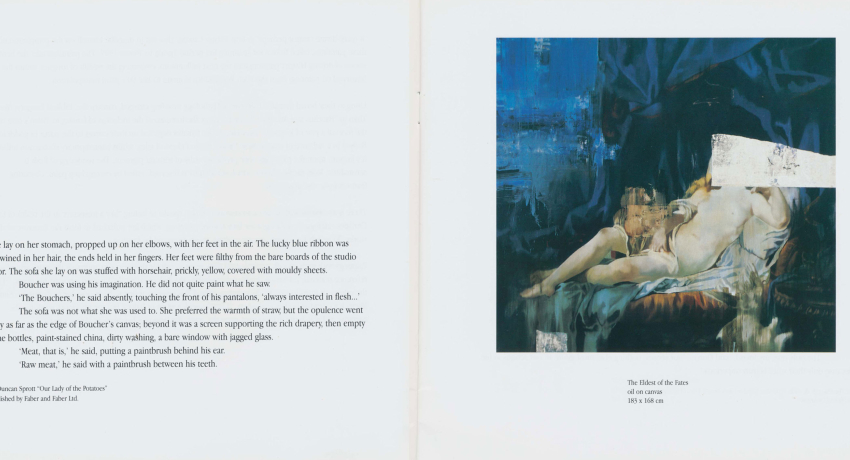 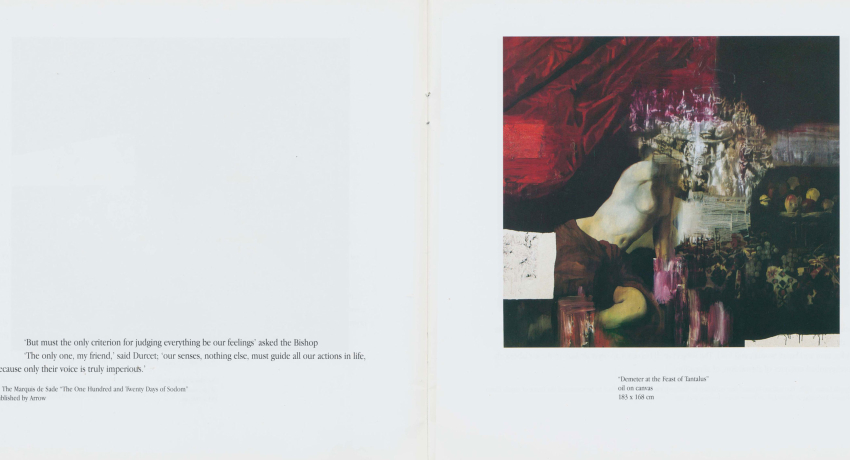 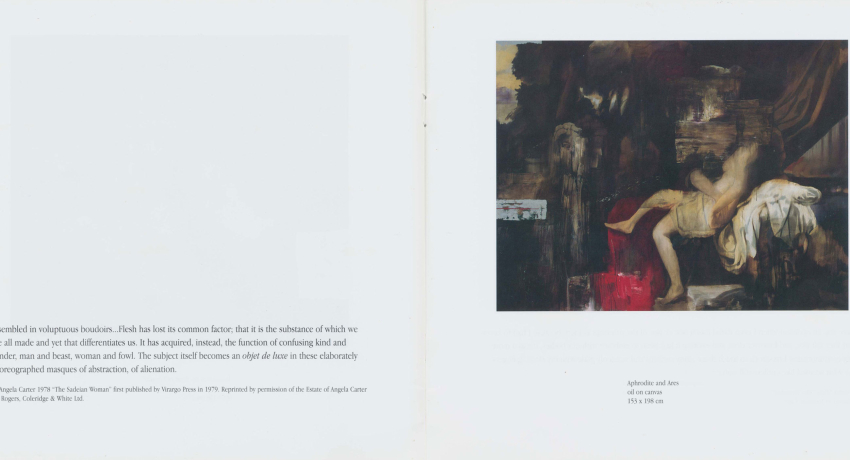 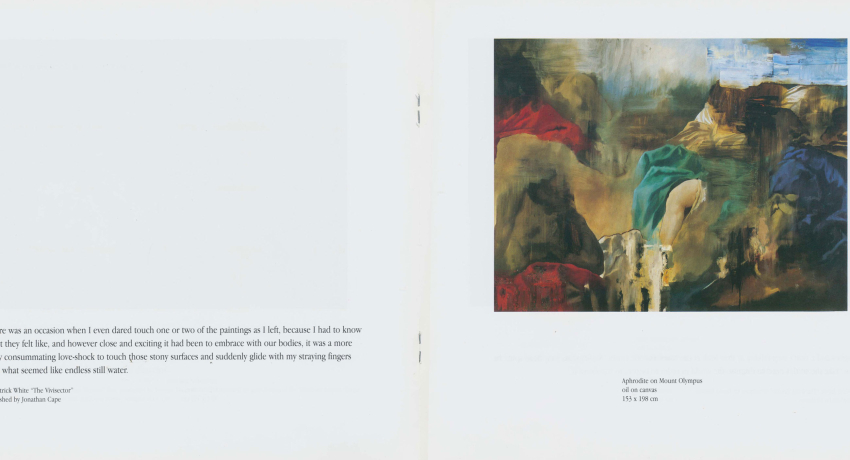