The Mark of Delirium and Destiny

Simon Casson (b. 1965) is a young English painter who received a very good education which is about all I know of his background. His work, however, is extremely interesting: at a single glance, we can see that it revises and deconstructs classical painting. Clearly, Casson knows classical painting. His technique is elegant; his flawless paintings are filled with natural, flowing figures. His mythological characters' postures, limbs and curved bodies look as if they could easily glide out of the painting itself.

Nevertheless, as these are revisionist paintings, tension and dissonance inevitably arise. Apart from the realistic portrayal of the figures (as well as several still life subjects), Casson fragments the painting and then puts it back together again; human figures lack features and have only bodies, which are depicted in motion. These figures have no way of expressing their reality outside of their bodies' movement because they have no faces. It becomes nearly impossible to discern the link between time and logic among the figures in the paintings. Their backgrounds, their relationships with each other, the depths of their hearts have all been suspended. This is pure bodily movement. Yet, their movement never reveals their heart or intention; the figures in the paintings, which are mostly Greek mythological characters, are incapable of expressing their innermost secrets. It is as if they have been extricated from the limits of history, surpassing history to become abstract figures characters outside of history. However, these abstract figures must also be depicted realistically. In other words, an abstract character is depicted realistically in order to be given expression; this is truly a new way of investigating the relationship between realism and abstraction.

The meaning of Casson's revision, therefore, differs from that of Western post-modern painting because post-modernist revision implements historical satirisation and deconstruction. In Casson's work, however, we do not see even the slightest hint of satire, the grandeur of history and the classics remains untouched and unmaligned. Casson's unique revision of history and the classics stems from the fact that his paintings do not contain the biting satire to which contemporary audiences have become accustomed. For Casson, classic has two meanings: one is painting as a form of classical expression his paintings co-opt sections of Renaissance masterpieces or imitate the classic masters. The other meaning of classic is found in his use of Greek mythological characters: these mythological characters themselves constitute classical European culture. Casson's paintings themselves as well as his painting techniques are inherently classical; moreover, the figures within the paintings are classical. Therefore, both meanings of classical exist simultaneously within Casson's paintings; and although he revises classical, he never ridicules it.

Why do I say this? There is no laughter within his paintings, nor is Casson himself derisive in any way. On the contrary, we experience delirium; more accurately perhaps, the light that envelops the painting dazzles us into delirium. Fragmented figures constitute his paintings, but which fragments are they? Viewers may be able to discern that this fragment might come from Tiziano Vecellio, or from the Mannerism or the Renaissance periods, but it is difficult to accurately ascertain which painting or composition it came from or which specific story or myth it references. In short, where are these fragments from and which have been juxtaposed? While this is, undoubtedly, rearranging, as well as co-opting and imitating portions of classical paintings, in this context, appropriation and imitation are innovative. Casson inserts blurred streaks of colour into these fragments of classical paintings to obscure the body or to connect bodies; these colourful streaks effectively break the body apart and divide the painting. Conversely, we can also argue that these streaks of colour seem to stitch these fragments together. The prominence of these coloured streaks further suggests the emergence of a demarcating line, which emphasis's the extreme clarity that exudes from each individual fragment within the painting. Essentially, each fragment is a distinct and complete entity unto itself that rarely interacts with the surrounding fragments due to an intense contrast in colours; there is always a bit of jagged white that ostentatiously slashes through the lushness of the painting. More importantly, however, the fragmented painting is richly textured, sparklingly dynamic, and emits a mysteriously dazzling light.

Casson uses heavy and vibrant paints. He applies them liberally onto the surface so that the painting, which contains shapes of all sizes, appears to be quivering, creating the effect of a movie that is frozen on a single image. From this perspective, it has the effect of looking at a mosaic that dazzles the viewer.

Why? In Casson's mind, perhaps, tradition and classical antiquity produce this dizzying effect. Mythical themes, historical figures, and classic masterpieces are so formidable and ancient, worshiped and disputed that they are overwhelming. Casson does not intend to disrespect tradition and the classics; rather, he seeks to express a person's authentic experience with tradition. Greek mythology and the mythological characters, classical art and especially the classical style of the Renaissance depicting Greek mythological characters all have an awe-inspiring effect on people. This is the intention of the great painting tradition; it furthermore sets the standard for the heights of the next horizon. Casson's work inspires a similar effect, but rather than tapping into the viewer's heart to unleash it, he invokes a kind of dazzling delirium through his perception, revision, and painting. Truly, dazzled delirium is made up of our confrontation with our experiences of tradition and classics.

The paintings themselves are stunning. We have difficulty identifying the painting's details because we are overwhelmed. Apart from the female figures (which although nude, deny us a knowledge of their individual identity), what is it exactly that weaves through this haze? Altogether, the blurred backgrounds, the fragmented female bodies, and the floating fragments of classic paintings create an indistinct image that begs the question; what is this?

At a glance, we can discern a blithe, beautiful, romantic, and poetic portrayal of the sky and the clouds that could have been taken from a particularly sensual scene in some modern-day movie. In reality, this depiction of clouds and sky actually illustrates unadulterated joy and the elimination of strife; this image has no relation to the struggle-ridden human world. It is an exquisite rendition of natural elements. Yet, another kind of natural scenery pervades Casson's paintings, which definitively negates the clarity of the heavens: these scenes are blurred, abstract, and deceptive; they are in direct opposition to the images of the clouds and the sky. If we were to say that the images of the heavens are suffused with poetry and pleasure, then the blurred scenes from nature could be said to be the complete opposite. They come in the form of black darkness like a tidal wave (overwhelming, perhaps?), a waterfall, a desert, a cold-blooded natural disaster; are these blurred black images not a portrayal of hell? Casson's dark images of nature are unfeeling, unstoppable, fierce and swift; his brush strokes are powerful verging on violent. In the same way that sky and clouds sever the goddess's body, these dark images of nature similarly split the goddess's face. Yet, the two divergent depictions of nature in the paintings have subtle confrontations that centre on the human body and are reiterated in the opposition within colour, form, sentiment, power, and even clarity-suggesting that God places man within two fates. Is this not, perhaps, a portrayal of the universally significant question of man's two-sided destiny?

Casson's paintings depict figures, or the Greek gods, in motion; because their faces are unclear, however, we do not know why are they moving. In actuality, it is unnecessary to decipher their movement's intentions. Their movement alone expresses their struggle, striving, toils and anxiety and elucidates the mark of destiny. Whether this mark appears in the heavens above, in hell below, beneath white clouds or above the wilderness, it inevitably strikes a chord in each of us. Whether this chord is melodious or moving, it is always fragmented, incapable of expressing the complete self because it is always obscured and attacked by nature. In Casson's paintings, heaven and hell attack the person in the same way. Here, nature deals not only with space but also with time-there is the eternal aspect of destiny; within the black backgrounds or the cloud-studded sky, history is irrelevant. We can only say that fate, whatever it may be, is eternal. This point may perhaps deepen our delirium; now, not only are we overwhelmed when we confront the painting and the classics, we also experience dazzling delirium when we confront our own individual destiny. 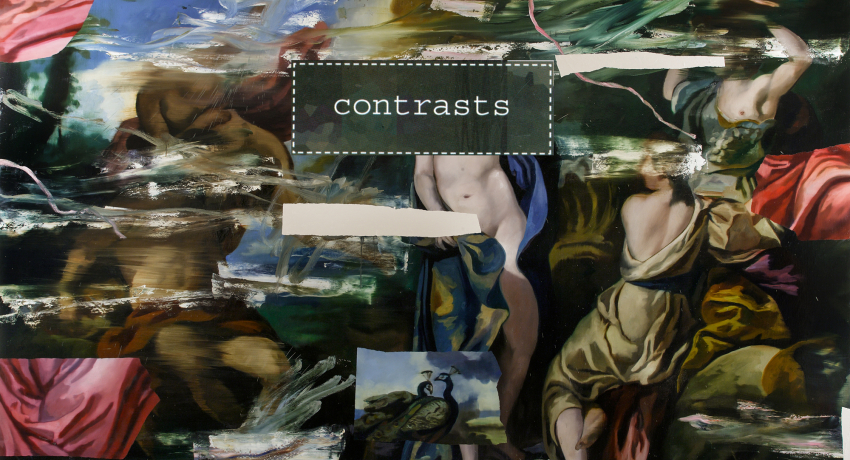 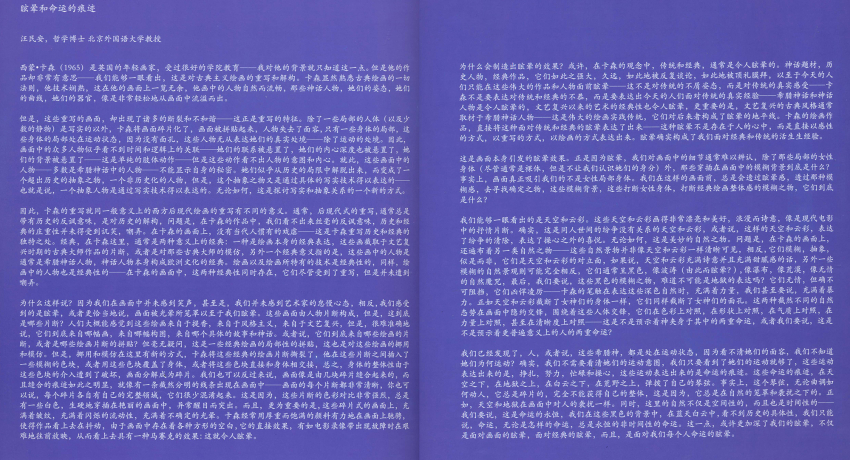 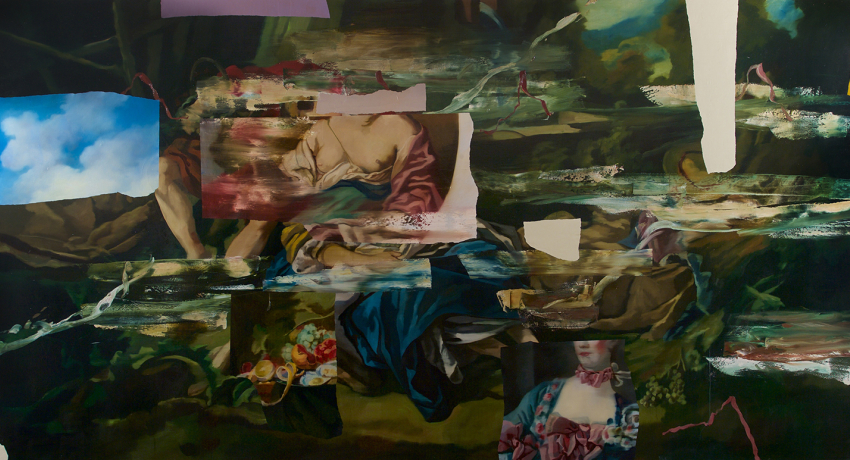 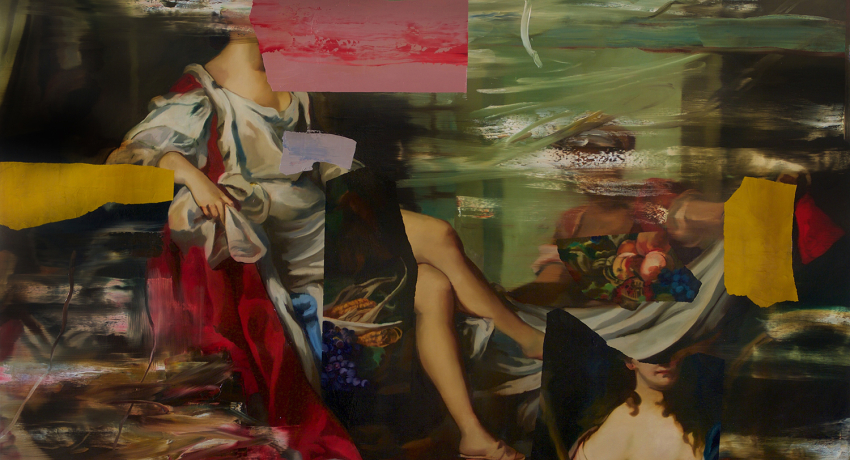