Virginia Woolf said that the world changed in 1910, and give or take a few years, she was right. The decade that encompassed World War I saw the sowing of the  seeds of scientific uncertainty, the development of motion picture technique and the beginning of the blurring of popular and fine arts. Stravinsky's "The Rite of Spring" made disharmony and jagged rhythms in serious music fashionable, while authors like Woolf and James Joyce brought stream-of-consciousness to fiction. And (at least partly) the art movements of Cubism, Dada and Futurism occurred.

All this cacophony and fragmentation and brave anti-bourgeois squaring off leads directly — ta-dah! — to the 12 paintings of Simon Casson on display at Lisa Kurts Gallery through March 30.

All right, we missed a few decades there — the '60s, the '70s, the '80s, the '90s — but Casson's work partakes of late 20th Century judgement too, particularly in the submerging of the avant-garde into advertising, the atomization of sensibility and the subversion of the sublime by irony.

Born in 1965, Casson is a British artist who received advanced instruction at the London Institute and the Royal Academy of Arts.

He paints like a dream he is painting dreams — and you could, eat the luscious surface of his pictures with a spoon; one feels that there's nothing Casson could not do with a brush.

His method is to intervene in typical mythological pictures from the High Renaissance and Mannerist eras, about 1475 to 1580, with strips and blocks of energetic abstraction, thus imposing irrationality upon reason and a sense of dissatisfaction, disrespect and parody on the scenes. It's de Kooning, one master, defacing Leonardo another master; it's Basquiat, the chic and tragic imp, laying graffiti over Bellini.

Casson also fragments his canvases into seemingly unrelated blocks of narrative, inserts irregular panels of cloudy blue skies or jagged white emptiness across the pictures, blurs edges and outlines, as if images were speeding by with the flicker of film, that symbol of modernism's impatience. It's as if the artist were saying, Who needs this junk?" and detonating the dusty attic of Europe's disastrous history.

When Titian  and other artists of the High Renaissance painted scenes from Classical myth, they were paying homage to a glorious though calcifying tradition, flattering their patrons and exercising their talents at depicting narrative and movement and the sheen of light on satin and velvet. It took a Titian or a 'Tintoretto to invest such storybook scenes with human majesty and vulnerability, while second- and third-rate artists churned these things out with the speed and character of assembly lines ("Another 'Orpheus and Eurydice' comin' up!') for minor nobility that couldn't afford Titian. The dim, stained remnants fill antique stores — and, alas museums —around the world.

In other words, these scenes of Classical gods and goddesses behaving badly or sadly ported fabled lands no one believed in except symbolically, kingdoms and heavens colluding at the borders of talent and commerce as art does today. When heroism and beauty are cliches, why bother to mock them with another cliche? Casson could paint a bottle of mandarin orange vodka or fit Aphrodite out with a pair of new Manolo Blahnik shoes, and his pictures would fit right into the glossy pages of Vogue or W. And why not?

"This is tremendously ambitious work, in many ways wholly admirable. One is reminded, in spirit, of Julian Schnabel's grandiose painting-assemblages on broken crockery of the late 1970s and early 1980s, heroic exercises in ego and expressionism, or of German artist Gerhard Richter, the greatest painter of the second half of the 20th Century, whose equal and incredible facility at realism, expressionism and abstraction are awe-inspiring yet leave one with a sense of disquiet. Shouldn't these methods require a commitment from the artist?

The violation of a sanctuary, like rape in the Hundred-Acre Wood, should seem an act of supreme desecration. For all their brio and brilliance, their agility and high coloring, their seductive surfaces and downright self-conscious handsomeness, Casson's, pictures don't convey the giddy sense of blasphemy that comes from thumbing one's, nose at the gods or the Old Masters, gods and Old Masters these days being merely additional entries in the encyclopedia of popular culture. To be a Bad Boy, you have to he badder than this. 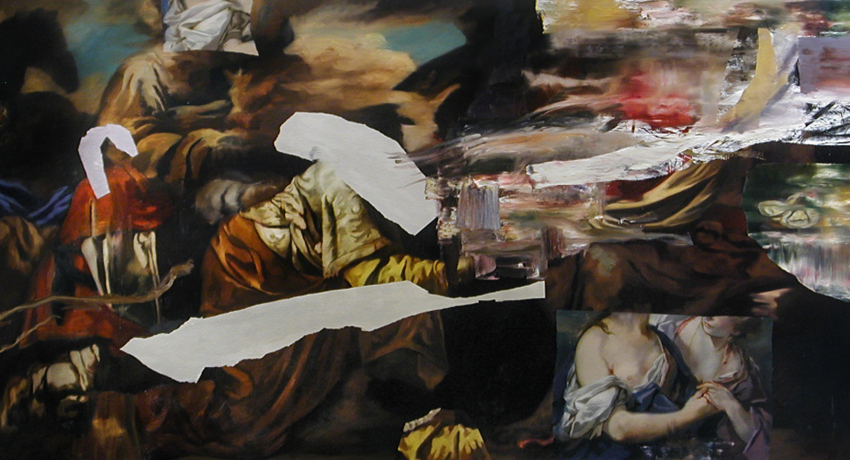