As Artist in Residence for 2012 - 2013 at the glorious Forde Abbey near Chard, Simon has embraced the West Country dialect, legends and myths for a constantly changing exhibition of paintings and drawings. Taking its title from the old words for smoke and rain, Smeech and Hrain is an exhibition full of mysterious phrases and expressions, hinting at tales once told in the old apple orchards where Simon is based. With their references to farming and the landscape, old superstitions and the abbey itself, the paintings take their poetic names from Somerset words which have disappeared in the mists of time: Timmersome (restless), Vayer (summer fayre), Quistie (wood pigeon), Rathe (early ripened).

Simon is known for his fascination with the universal language of the classical world which he deconstructs in his paintings. Those references are still there in Smeech and Hrain but the work has a locality as seen through the eyes of someone who is not a native. Born in 1965, Simon was raised in Zambia until he was 16; he then moved to Cumbria before his family moved to Somerset. While he was at the Royal Academy in London Simon met his wife Sheridan, who was studying at the Slade. The couple now live in Crewkerne with their three daughters, a Dalmatian called Marley and a flock of chickens. Their 180 year old home was originally built for a tea merchant's daughter, and its period features include an old coach house. This is Simon's studio, to where he heads each day before breakfast.
"First thing in the morning you can look at a painting with fresh eyes," he explains. I'll then work through the day, maybe creating a natural break where I will do some research. It's almost like being a naturalist, collecting material and bringing it back to the studio". "There's that sense of discovery when you go for a walk and see something. If I find a crumbling building I will come back and take a look at how Turner, John Martin or Claude Lorrain would have tackled it.
"I almost want to create the ideal of what I want Somerset to be like." adds Simon, who says that the old knotty, mossy apple trees in Somerset fascinate him the most.
"I think Simon's perfect environment is at the back of Perrott with the old gnarled cider trees and the wassailing around the old apple orchards." adds Sheridan, who wouldn't let Simon burn apple wood on the fire when they lost one of their trees. "One of my old books told me it was very unlucky and I thought, I'm just not going to risk it!"

Simon and Sheridan turned to an old book on Somerset dialect written by Frederick Thomas Elworthy for the titles in Smeech and Hrain. And they believe the Somerset words may be familiar to some older visitors to the exhibition. "I did try out some of the dialect when I was playing cricket recently", says Simon. "I asked someone if the words speech and train rang a bell and straight away he said 'smoke and rain'.

Simon, who has won several awards for his art, tends to work on a collection of paintings at the same time and these then evolve together as a group. "People ask me how long a painting takes, well it's not a linear production from start to finish", he says." I like to leave them alone for a bit - give them space - and come back to them."
Preferring the flexibility of oil, Simon's paintings are often large scale productions. A 5 metre by 3 metre commission for the Lanesborough Hotel involved shutting Hyde Park corner in the middle of the night so that the lorry could deliver it.  His work can also be found at Barclays Bank HQ, the Bank of America, Shell UK, Metro-Goldwyn-Mayer and many other public and private collections. The Hollywood star Ted Danson has one hanging in his bedroom while HRH The Prince of Wales owns two small figurative pieces.

Forde Abbey, with his impressive monastic and state rooms, is a fitting location for his current work. "I was very conscious of the fact that people are living here," says Simon, who is inspired by the surrounding landscape and Forde Abbey's fantastic sense of history. Primarily I will be working when the house shuts to the public but the gardens will be open and you will probably see me outside either drawing, taking photographs or maybe doing some kind of quick sketches in the grounds."
Sheridan is pleased to know that local people will finally be able to discover her husband's work. "The wonderful family at the Abbey embrace contemporary art with open arms. This is the first time that Simon's ever shown any where near where we live. before this people had to travel to London to see his work. It's lovely to have it close by." 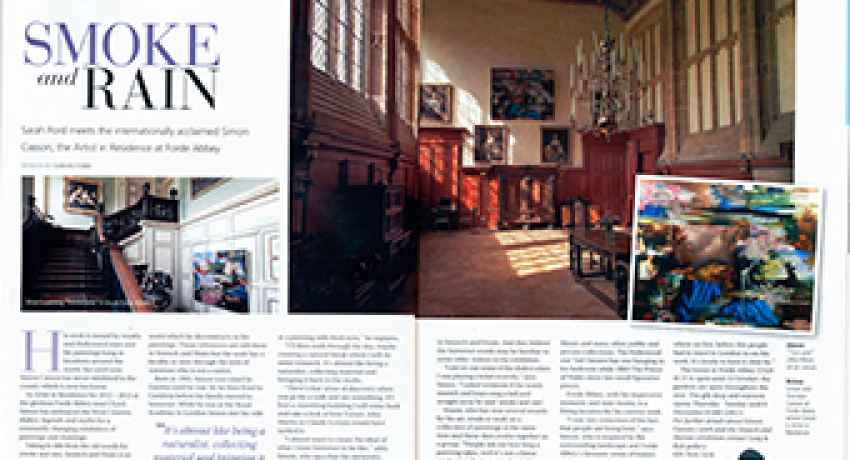