In the past, Simon Casson's art has lent itself to the sound bytes required of modern art's sugar-rush reportage. Manners maketh mayhem, graffiti baroque - that kind of thing. But this genre of headline material is no longer appropriate. Casson's voluptuous riddles of colour and interrupted classical scene still remain, but the formality of the compositions in his new series, The Empusae, at Long & Ryle, ushers in a more humane realm.

Casson trades in painterly ambiguity, reprising characters and scenes from paintings found in sources such as old Sotheby's catalogues. He then disrupts his palimpsests of Old Masters with apparently random jags, smears and veils of colour and texture, and the sheer painterly insouciance . Casson dislikes overpainting - is often stunning.

But skill, even remarkable skill, is not enough. What's going on in these paintings? What makes them engaging? To understand the latest changes in his work, we must first look at his creative baggage. Casson has always said that literary ideas inhabit his paintings: de Sade on sensual imperatives, for example; or Angela Carter on masques of alienation and abstraction, and Alina Reyes on voids and disguises. Yet, Casson is primarily an aesthete rather than an intellectual: his interest in literary-cum-philosophical speculations simply confirms an instinct for immersion in images and ideas that are implicitly mysterious.

He's particularly interested in classical myths, the more obscure the better. The new paintings invoke the Empusae , cannibalistic female monsters of Greek
myth, half-ass and half-human, with the ability to change themselves into bitches, cows or beautiful maidens. In these forms they attracted travellers and then devoured them; a combination of vampire and succubus whose current manifestations can be found in the postmodern Plato's Cave otherwise known as the Big Brother house.

Rich material, indeed, and perfectly suited to Casson's art. The morphing, via overlay and collage, of one thing into another is what happens on his canvases. And, confronted with these scenes, we duly become the unwary travelers, at risk of being devoured not by the Empusae, but by fragmentary beauty.

In her 1999 preface to Casson's series, The Wrath of Achilles, Sheridan McLardy rightly described his paintings as an "opulent, hedonistic hymn to the God of paint." More questionable was her assertion that Casson's canvasses were an unprecedented form of History painting. Despite the mythomania of the work, Casson is surely not a History painter, as such – nor quite the "quasi-divine creator" he senses himself to be. He is, though, a cipher for the contemporary craving for conditions that are both Mannerist and baroque; a craving that recalls the complaint in Albert Camus's still trenchant collection of 1942 essays, The Myth of Sisyphus: "We turn our backs on nature; we are ashamed of beauty. Our wretched tragedies have a smell of the office clinging to them, and the blood that trickles from them is the colour of printer's ink."

There's certainly no smell of the office in Casson's Empusae series. And, for the first time, we encounter intimations of generous human presence. In the
past, his figures have been lusciously incomplete: the never quite fecund bodies; the lips that may never have kissed; the single ashen breast, cut-and-pasted into position; and the overwhelming stillness of the compositions, despite their literally brilliant oppositions of figure, abstraction and colour.

Casson is profoundly interested in the paint-primacy of artists such as Rothko and Pollock, but his earlier compositions can just as well be compared to the strange conflations of style, content and light that occur in paintings  Loesung and Hohe, for example  by Neo Rauch. The common ground is Mannerism – sensually based in Casson's compositions, satirically in Rauch's.

Casson has also evoked expressive modes that tally quite precisely with certain highly significant strands of post-millennial architecture, whose forms and textures can be thought of as a new aesthetic that mimics the existential meltdown caused by what the great Dutch architect and cultural critic Rem Koolhaas describes as the "violent surf of information." This powerfully chaotic force is killing any possibility of utopianism, and leaves most of us wallowing in a hugely complex present generally bereft of any engaging sense of the past or the future, let alone the potential values and redemptions of love or primal doubt.

Koolhaas speaks of "the eerie distortion of the generic," and this is part of what generates Casson's visions: exquisitely incoherent, ungeneric smears and marks which overly the equally exquisite detritus of classical scenes that are generic. I see no fundamental difference between the architectural Mannerism found in the interiors of Koolhaas's extraordinary Casa da Musica in Porto and much of Casson's early imagery. The serpentine glass panel that separates the
Porto auditorium from its Members' Room might have been painted by Casson, and isn't very different in its surreal effect to the silkily abstract wave in one of his earlier paintings, Tantalus and Eurynassa.

Casson, like Koolhaas, is not afraid of stark juxtapositions. Yet there is something unexpectedly agreeable about them. His distortions and cut-ups –he sometimes uses Photoshop software to test potential collages – do not prompt furious reaction. The more apparently violent his formal disorders, the more petrified and acidic his overlay colours, and the more impossible his textures seem, the more we accept the melange.

And this has been the first paradox of Casson's work: complex layering and occlusions producing an abstracted graphic impact. Thus, the presumed History painter turns out to be a thoroughgoing abstract sensualist who requires our eye to submit completely to paint, and to perceptions and reactions that do not, after all, require significant knowledge of classical myths.

Like the work of Koolhaas and Rauch, the paintings in the Empusae series are infused by a zeitgeist dominated by the increasing gravities of the ephemeral and the phenomenal. Today, almost any painting, text or architecture that is expressed too obviously runs the risk of being thought of as naive in our chimerical spinworld.

Casson, of course, layers rather than spins, breaking up sophisticated raw material to create Ur visions. He is producing a new kind of perceptual and emotional ground that would surely have meant something to the tragic post-Lawrentian Savage in Aldous Huxley's novel, Brave New World. "I don't want
comfort," he cried, "I want God, I want poetry, I want real danger, I want freedom, I want goodness, I want sin."

Which leads us to the second paradox that has, until now, defined Casson's paintings. His cornucopias of figure and abstraction should, perhaps, have made us feel a little like Michael Powell's murderous Peeping Tom, or James Stewart in Hitchcock's Rear Window. But we don't: the sexual charge that the paintings suggested in the past was defused by graphic complexity, and by the painterly corruption of known figure and landscape into unknowable gesture.

The Empusae paintings reveal major new formal and emotional shifts. They still demonstrate the dissonances of modern existence: broken narratives; jump-cuts of emotion and desire; the sense of a coded present; and a semblance of ideas. But The Empusae series illustrates the postmodern human condition with a new kind of beauty and craft that no longer seems to buy into chaos as the defining paradigm.

The richly painted graphic tensions of the earlier work are now mediated; the overall image may still be experienced as abstraction or collage, but the once stark clashes of part-figure with pure colour are much subtler. In The Brazen Sandal I, the apparent unruliness resolves rapidly into coherence: figure and perspective are the potent forces here. In the past one entered Casson's compositions via a gestalt process. Now we are engaged in a different way.

Once, the tensions between figure and random colour were often beautifully stark, and accentuated sheer painterly brio. Now, the collages are often less graphic; we sense depth rather than overlay. And the figures are becoming unlocked. It's almost a shock (pleasant, of course) to find a more or less
complete nude in The Daughter of Belus II and to encounter, in The Daughter of Belus III, sublimely tender skin-tones beyond the wildest dreams of our because-you're-worth-it generation.

The collaging is subtler and, therefore, less abstracted in overall effect. Only The Haunch of the Empusae and Lamia's Revanche recall earlier complexities, though that doesn't stop the latter from being a particularly engrossing work dominated not by collage, but by its dark, richly shadowed centre. Indeed, Casson's compositions tend now to be more centrally anchored, either via figure or dense texture. And this, in turn, produces more distinct perspectives. The Brazen Sandal I and The Haunch of the Empusae II show this particularly clearly.

In the past, Casson has caused our eyes to wander, to jump-cut, to seek out curiosities of sensation. Now, our gaze is no longer solely that of the voluptuary; it is steadier. The artist's Mannerism - the brilliant mayhem - is morphing into a new sense of time, place and emotional potential; we are more interested in his dramatis personae as characters. They seem, perhaps for the first time, fully vivacious, touchable, unephemral  as if they might have histories, and be attached to history. Casson, so gifted as a postmodern translator of the violent surf of sensation, has begun to consider other modes of existence. 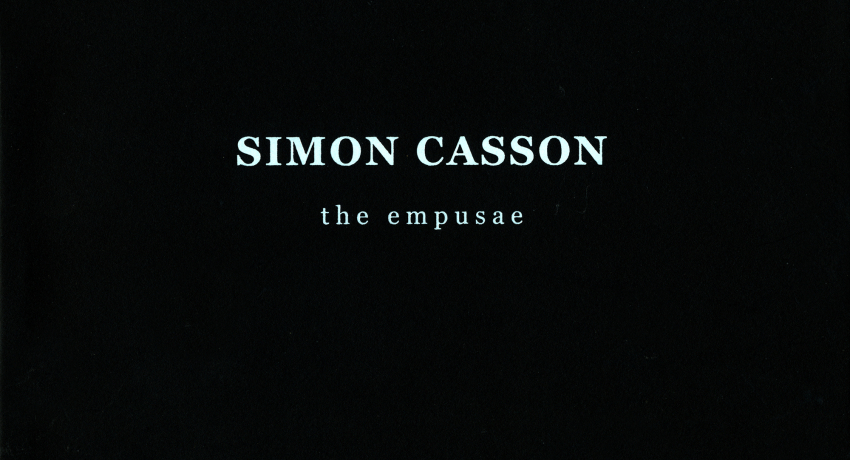 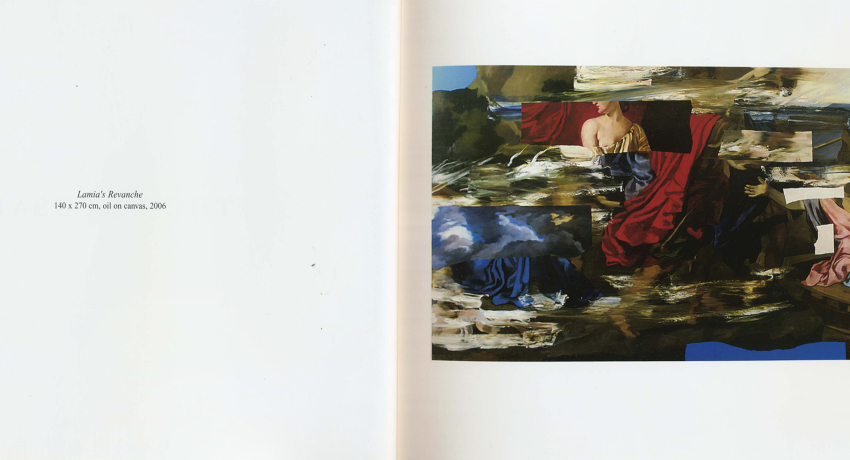 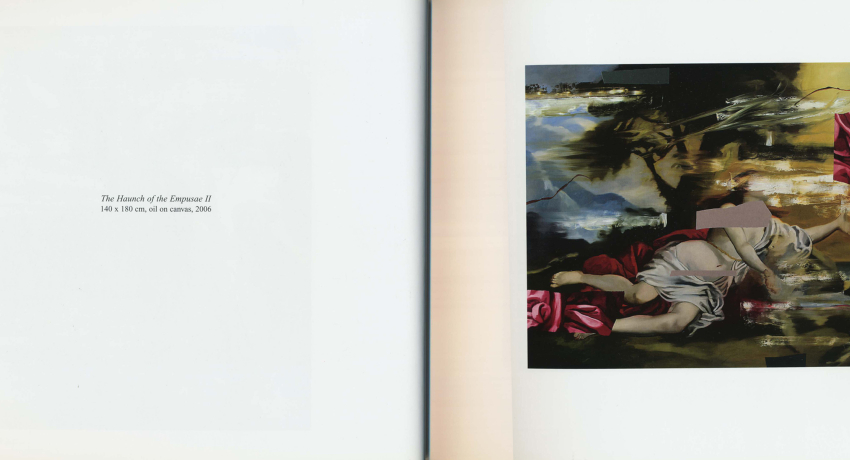