We live in a fragmented world. Splintered images and sound bites impact us on a daily basis. The merciless reign of the individual has create a kaleidoscopic culture composed of ever-changing trends, innovations, beliefs and art.

Yes, art. The silent, ever-present witness to human history, that places our existence in a larger cultural context, giving it meaning beyond time and space.

Today's artist, lost in the visual cacophony that is his or her workshop, is faced with a disquieting plethora of visual stimuli front which to draw inspiration, formulate a message. The constant shifting reality of the age of globalization has driven some contemporary  artists to seek out the classical, the enduring, returning to such well-tested themes as the human figure, landscape, portraiture.

Others plunge boldly, into this vertiginous, beguiling chaos, producing works aimed at provoking an instant reaction, shocking, and by nature as impermanent as the material detritus they are made of.

Simon Casson chose to reconcile the two, navigating between these diverse worlds with inspiring case. Borrowing as much from the past as the present, he reaches out to the Great Masters, appropriates themes from Greek mythology, from the sensuality of Baroque, and the mystery of the Renaissance. His large format paintings -arc a dense mosaic of images, slivers of ancient landscapes, fragments of sky with billowing clouds, a glimpse of a classical nude draped in heavy fabric... Juxtaposed against these familiar pictures arc morsels pared from a very different reality: a striped banner, like an Etonian scarf floating on air, a basket of fruit torn from another image sitting at the feet of a Greek goddess, a jagged frame with an enigmatic smear of colour...

These complex collages arc further disassociated by the introduction of rectangular patches of colour, like torn fragments
Of a colouring pad, that jut into the composition, as if breaking through from another dimension.

At first glance disturbing the already multi-layered tableau, they in fact hold the composition in check, transforming the whole into a strikingly contemporary image.

Casson adroitly plays with perspective and focus, forcing the viewer to constantly readjust to the shifting fragments that compose the paintings.
He assembles this multitude of visual scraps with the assurance of someone well versed in the demands of classical composition, and then with a marvelous irreverence, smears the faces, smudges the edges, obliterates whole swatches of canvas with sweeping brush strokes.

His intertwining images are in constant flux, challenging a purely sensuous enjoyment of their opulence by the introduction of bold modernistic touches, that both confuse and delight.
Light is strangely absent from the works of this London-based painter. It is rather colour and form that dictate the atmosphere: dark, moist green; delicate blue; luminescent ochre; quiet, somber grey...

Casson's art is symptomatic of the times, and just like them, in transition. The past has come back to make sense of the present, while the future is already making its appearance. In his paintings, tradition merges with modernity, classicism with abstract expressionism, the movement is spiral and continual. They hover in that magical space where everything meets and parts, only to reassemble again, and thrill anew. 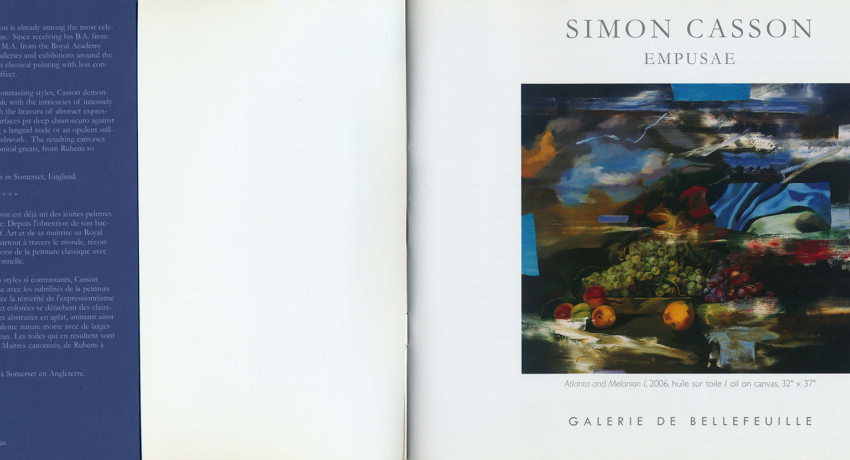 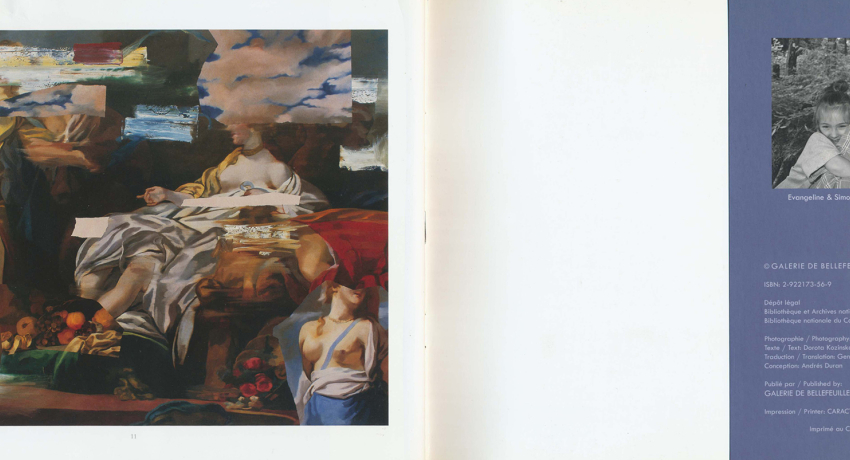