A Gloss on the Old Masters

Simon Casson presents us with the Western tradition of figure painting reinterpreted for a contemporary audience. This is traditional observed painting fractured with abstract surface shapes and mixed with speed marks, skids of pigment, of colour and light. As one astute journalist commented, Casson's canvases have the look of vandalized, paint-smeared Titians. This is double-edged, both a tribute to Casson's exceptional skill in painting flesh, drapery and still-life objects with startling verisimilitude, very much in the manner of the Old Masters, and yet also containing the unspoken question - why paint so beautifully and then spoil it? The answer to that is complex, and lies at the root of Casson's artistic endeavour.

In this peculiar period of history through which we are living, it's not enough to demonstrate versatility or expertise as an artist, there has to be some unique (and easily definable) selling point to your work. So, on one very basic level, Casson is the artist who paints like an angel but lets the devil in to visibly disrupt his good work. He deals with complicated and - to the vast majority - little-known cultures: the Europe of the Rococo and Baroque, and the world of the Greek myths. His work needs to be fluent in these past languages, but it does not have to communicate in the manner of a history lesson. It can make allusion and suggest rather than state, but it also needs (in order to have real relevance) to say something about contemporary life. This is where Casson handles his materials so well.

The Greek Myths, though containing as much wisdom and useful instruction as ever, have fallen into desuetude since the demise of classical education. Casson, however, is fascinated by them, but more as a source of general inspiration than as a pattern-book of narratives. The titling of his pictures (such as Athene Pallas or The Moerae) is essentially metaphorical, not at all literal, and is intended to add another layer to the painting's identity and range of resonance. There is even an ironic pleasure to be had from this pursuit. Consider the titles of his previous exhibitions: The Eldest of the Fates, (1998), The Wrath of Achilles, (1999) and Tantalus, (2000). Also The Fate Clotho, and The Beasts of Hyria. Not bad going for an age that favours such benighted exhibition titles as if one thing matters, everything matters.
Such a preoccupation with the classics could be considered elitist and therefore alienating, but the art of painting has always gained in repute from being somewhat mysterious, and the added layer of subject matter with which Casson has loaded his paintings tends to reassure viewers as to the worth
and seriousness of the end product. Coupled with this is the complex emotional bouquet - just a frisson of desecration, a hint of gross moral turpitude in the fact that these images have been so thoroughly interfered with - the sort of glamour which the Greek myths always projected in their own right, but now, being relatively unknown to all but the cognoscenti, perhaps need in order to be appreciated in an unheeding world.

Casson also makes an original contribution to the still-current debate, which has been running for more than a century now, about when a painting is finished and when unfinished. He does this by striving for, and achieving, a high degree of finish. But, as one might expect, it is not consistent across the surface. The vaseline smoothness of some passages is disrupted by a chalky dryness in 'others, or disturbed by a blob or trickle. Light bounces off some areas and sinks into others. Casson is nothing if not discontinuous.

Although these paintings can be said, most definitely, to be narrative paintings, the viewer is hard put to it to say what precisely are the stories. And, in a very real sense, a single plot line is not important. There is, for example, never one single Old Master source for a painting; indeed, it is difficult to identify individual artists let alone specific paintings. (An exception to this is to be found in The Moerae, in which the drapery at the bottom right was evidently inspired by Caravaggio.) Casson sifts through the images reproduced in sale-room catalogues, lifting a passage here, a passage there, when he needs a particular motif or a reminder of an Old Master solution to a specific pictorial problem. The artists can remain anonymous as long as they serve their artistic purpose. 17th century Dutch still-life is a fecund source of imagery, but Casson regularly buys organic fruit and vegetables to obtain the sort of effects he needs. Besides referring to reproductions, he is continually drawing the figure, still-life and drapery, and mining their appearances for information.

The largest painting in this show is entitled The Aegean Zenith, and is a complex image comprising figures, drapery, still-life and interludes of painterly or hard-edged mark-making. The clasping figures at bottom right look like a section cut from a reproduction of a painting by Boucher roughly collaged onto the picture's surface. (This is because Casson has made these figures stand out from the picture plane; the other fleshly or draped incidents are carefully merged into the rather shallow space of the picture. They cohere in a different way, despite the dramatic surface disruption of the abstract elements.)
These Boucher girls are exquisitely painted, but just as much concentrated skill has been put into the rendition of the areas of non-descriptive paint. Examine for a moment the striking horizontal passage at top right. It may look simply like a passage of bravado brushwork, a piece of enjoyable gesturing on the artist's behalf, but in fact it is a highly ingenious interpretation of a slice taken across the imagery of a Fragonard painting, signifying nothing but suggesting much. Because it is taken from a pre-existing image, it is redolent of meaning, though in this context not stated. But the meaning is felt by the viewer, even if not traced or de-coded, and it brings an added authority to that area of the painting. In suchlike manner is a Casson composition built up, layered with meaning as much as with paint.

There is a stirring mixture of formality and the casual in Casson's work. The exactitude with which he draws his figures or paints a fruit is balanced by the informal gesture of dragging his fingers through the paint to interfere with - literally break up - the surface. Casson constantly edits the imagery, adjusting appearances. The oysters on the right of The Aegean Zenith begin to melt into what looks almost like a lily pond. The chestnuts on the extreme left are set off in a kind of pun against the horse's neck. The rich painterly effects are, as it were, cancelled by the abrupt gashes of white. The illusion is exposed, but also maintained.

Casson's paintings betray a wonderful variety of surface texture. Many passages of carefully applied paint look like the blur of the countryside seen through a car window whilst speeding down a motorway. (This kind of kaleidoscopic smear effect recalls the work of the contemporary master Gerhard Richter.) Yet at the heart of every Casson image is a still point, an entire absence of movement, which pervades the imagery. However fast the mark-making, the image itself is arrested, paused as if in meditative thought.

At a fundamental level, the paintings are about the way we look at imagery - the cut and splice and superimposing of overloaded quotidian looking, the eye and brain busy with registering more than one thing at once. In the same way, the construction of these pictures is intended to echo the way we put things together mentally - the haphazardness which is grounded in instinct. Casson's process is an analogous one.
Casson doesn't ever use a complete figure - in these paintings there are no heads and no feet. You might get lips if you're lucky, but that's as good as it gets. How like life. For aren't our lives full of fragments, of incomplete lines of thought, of actions interrupted by the demands of others? We may return later to take up the thought, or complete the action, but something will have changed, the continuity broken, and the thought or action might even develop differently. In this way does Casson's imagery reflect the structure of contemporary existence.

Pelias'Tourney is a hunting painting, populated by men pursuing women. A generic image of a stag at bay at top right sets the scene. Interestingly, Casson felt this painting was getting too specific - too realistic, in a word - to satisfy his pictorial and intellectual demands of it, so he blurred some of the details. In such a manner will he adjust the presence of a picture, altering the balance between abstraction and representation to make an image which feeds off the past, but exists very thoroughly in the present, yet is neither too definitely one thing nor the other. In this painting we see the full extent of Casson's ability to paint flesh gloriously - from milky blue and marble white, to warm brown and flushed pink.

Richter is benignly present in the dragged paint of The Rod of Lachesis, in the building up and obscuring or editing of the imagery. Casson is expert in the properties and potentials of his paint, its effects and drying times. Sometimes he uses a little beeswax mixed in with the paint. At most others, varying admixtures of alkaline resin. Colour is carefully pitched. Look at the still-life element on the right of the picture, and how the purple of the grapes is tellingly juxtaposed with the yellow of the apple or peach. Simple perhaps, but exactly judged. Casson's first idea for this painting was a classic S-shaped pattern through the figures, with two flanking passages. But he didn't want it too organized, or too loaded with information. That's when he starts editing his image, dulling down passages by freely overpainting, and rendering the descriptive more abstract.

The three small still-fifes named Cameiro and Clytie, contain passages of landscape painted slightly out of focus. This disorientating effect is deliberate. Casson de-stabilizes the composition to sharpen our perceptions and edge the picture away from sentimentality. The paintings also make references to the larger pieces, and echo them in the handling of the drapery effects. Cameiro and Clytie I is distinguished by the hard-edged quality of its drapery and its honeyed colours, and by the
sensuousness of the oyster in its shell and the half-peeled lemon. (The peeled fruit is a recurrent motif, as is the pomegranate.) But there is disquiet here too; why else do I keep thinking of the neurotic hyper-realism of Salvador Dali?
A Casson painting is composed of a number of diverse shapes locked together to form a new unity. There is a complex interweaving of space - the apparent randomness is actually highly structured -with checks and balances of shape against form, of contrasting weights, of surface and illusory depth. Those strange angular shapes floating on the picture surface, made with masks of newsprint which Casson attaches to the canvas and paints round, are evidence of his tendency towards more overt disruption. In these new paintings, Casson takes less trouble to disguise his interventions, and is more actively subversive. Elsewhere he reinterprets drapery, making marks with plastic sheet applied to the picture surface which are intended in themselves to look more like the texture of fabric.

Structure (and editing) is all. Casson himself mentions Hitchcock's Rear Window in this connection, with different things happening in different windows - or areas - of the painting. There is also something of the capriciousness of the gods about the activity - the collage-like juxtaposition of discrete elements - though there is none to be seen in the luminous finished paintings. Simon Casson attempts something heroic and utterly contemporary in these new paintings, and has the wit as well as the skill to pull it off. 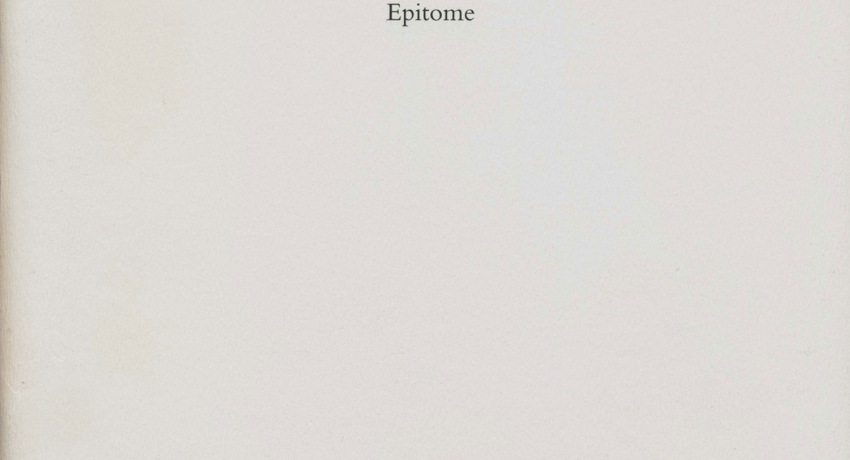 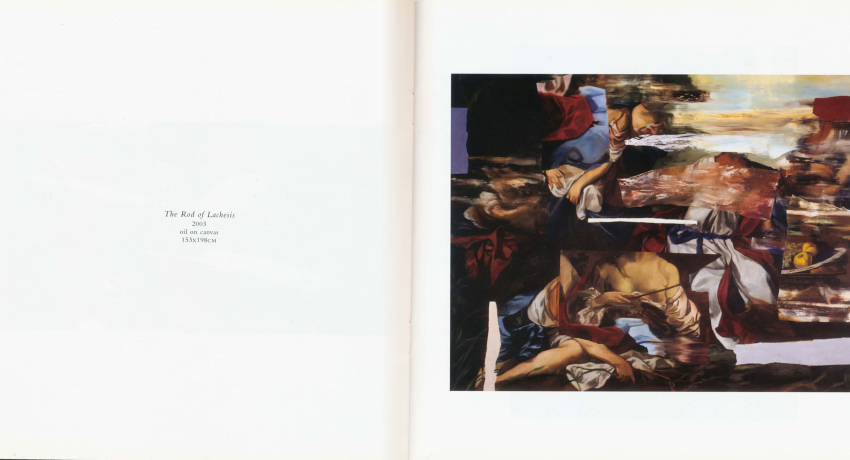 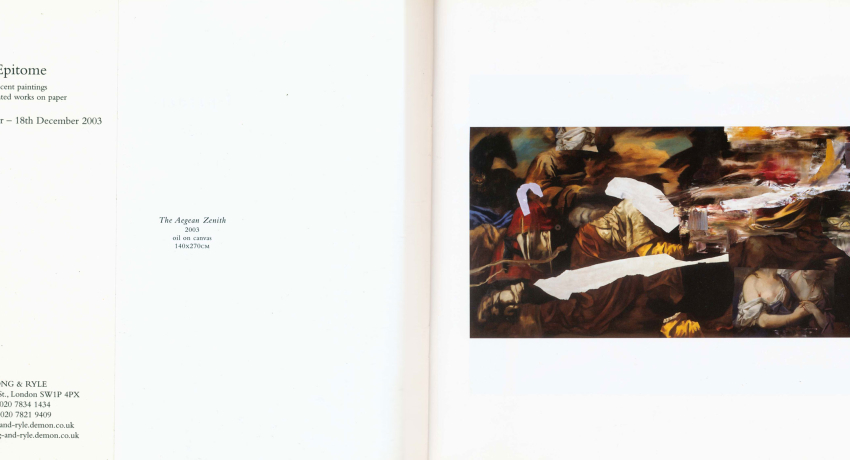