Simon Casson is a gifted painter who finds himself, in his early 30s, at the crossroads of innovation and success that has made much of a sensually schizoid worm in the bud. His large canvases have the look of vandalised, paint-smeared Titian. The skin, the fruit, the velvet, are perfectly achieved; so too are the smears and squibs and gossamers of graffiti. The images, veil upon veil of them, are the neo-baroque equivalent of distorted chords.

And so Casson finds his work selling fast because collector's are attracted to his meticulous combinations of classical high art and wild-thingery. Since leaving behind fully abstracted canvases at the Royal Academy Schools in 1994, Casson has become a different sort of prodigy. At first glance it is irresistibly tempting to tag him as the Nigel Kennedy of the fine art world - febrile, tousled, hungry-looking, a geezer-manque who probably wants to solo like Hendrix and talk Estuary.

The collection at London's Long & Ryle gallery is called Tantalus, and the title is apt, since Casson finds himself between the rock of his technique and a soft place. There's no doubt that he could sell this kind of work on a highly profitable production-line basis if he had a mind to. But its voluptuous facility should not be mistaken for complacency - not yet, anyway. There's a great deal going on in this work, even if the overall effect - despite the painterly equivalent of bent notes and reverb - is at times almost too agreeable.

On the other hand, why not? In his increasingly delicate and wide-ranging experiments - he takes collage ideas from billboards, broken tiles, animals, Piero dells Francesca's John the Baptist - Casson's approach remains rooted in checks and balances of colour that are complex, but which ensure that the layering of coherence and incoherence get equal weight.

Apparently random squibs and brusque scrapes of chrome and a chill yellow - rather a trademark - are nothing of the kind; none of the abstractions are. They have been carefully related to the painting behind the painting - the classical ground lifted from lesser-known painters ferreted out of Sotheby's catalogues. And we never quite see the model's head; a bit of flesh and, in The Omission of Admetus, folds of robe as densely red and whorled as a half-opened rosebud.

But there probably isn't. The paint is too lovingly worked and - in the case of the abstractions - reworked to give 3-D effects. The delicacy and vitreous luminosity of these improvisations also come from the fast-lane: Casson cartoons the basic forms in white on a dark background, then wings it. He dislikes over-painting, and the high finish seems effortless.

And so viewers find themselves in mysterious realms of erasure and illumination. Some of the gauzier, vaseline-like smears seem to overlie unknown second or third images. It's not a case of toffy withheld from Peeping Toms; just that the other sensualities are, finally, more intriguing.

Casson hag described himself as "a quasi-divine creator, perhaps". Surely not. He is, rather, a shrewd cut-purse in the house of legend and esoterica. In his 1998 exhibition, The Eldest of the Fates, the images in the catalogue were accompanied by choice cuts of text highlighting the artist's well-springs: de Sade on sensual imperatives, Angela Carter on masques of alienation and abstraction, Alina Reyes on voids and the need to disguise the world in order to bear and transform it.

Whether painted by a closet deity or not, Casson -who sometimes uses Photoshop software to jigsaw potential settings -leaves us with vibrant colour, ambiguity and a fresh take on painterly editing. The abstractions are like jump-cuts or the blown-up harmonics of small areas of the base images. The not quite random blocks and smears are even likely to carry shadows that fall on the classical scene, making them punish; smears as deconstructed cloaks and draperies, the classical wrenched into chaotic Greenwich Dome Time. There is, though, one odd thing about the paintings: despite their apparent vivacities, clashes and layering’s, they seem almost impossibly still. It seems that mayhem maketh manners.

In Hippodameia and the Heraen Games, it is as if the central female figure - cloaked, full-breasted, headless - sits behind sheet glass on which abstractions have been splurged. But the "mess" is perfectly balanced and the eye shies away from preferences. In Chlorin at the Plerian Spring, the zones of abstraction are connected by an over-heavy left arm and the opposing diagonal formed by the figure's pale dam- son-coloured wrap. This formality is utterly still behind the outer collage of colours and textures. Tantalus and Eurynassa combines violent disorder with petrified colours, notably in a deep violet ribbon that Casson must surely have razored out of the drape in Ruben's Samson and Delilah.

His most delicately seductive touches are found in the still life, The Banquet at Mount Sipylus. Here we have gossamer overlays that vary in texture from frosted glass to Sellotape, and this luminosity and liquid physicality surfaces again, and most brilliantly, in the greyish blue squiggle-zones in Niobe and the Love of the Twelve.

All very tantalising and mysterious. Odd, though, that one finds oneself thinking of the female figure - it's always the same model - and imagining her perspective. Perhaps hers is the most revealing vista: the headless stranger in rumpled shirt and spattered jeans intent on painting out her view of Casson's studio, the Rothko card pinned to the wall, and the Somerset garden beyond, where a dalmatian lies alongside a sleeping child; the two-way mirror.

Casson's commercial trajectory is assured, his skill and scale is proven. One wonders, though, where he can go from such a secured position. Will his work be caught in a nuff-said vice? Will he choose to become, a la Nige, just plain Casson and paint perfectly blurred visions of Odysseus' Riders on the Storm? Or is something more radical on the way? Maybe the faceless model knows something we don't. She, after all, is the one looking through the glass, abstractedly. 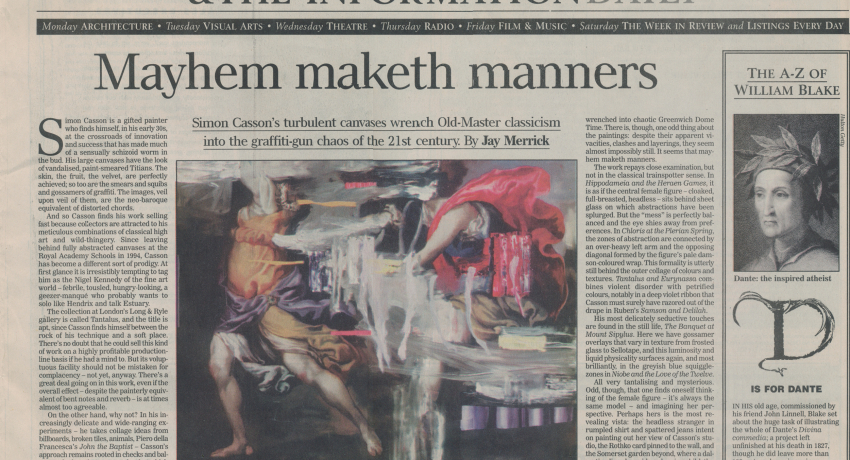